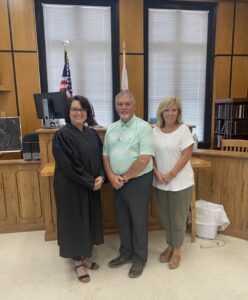 Mayor Terry Holley of Florala was re-appointed for a second term as the Resident Director for Covington County on the Board of Directors of the CPYRWMA. Shown is Lisa Harris, Mayor Holley and Judge Stacy B. Brooks.

Mayor Holley was born in Lockhart, AL and spent most of his life in the Florala/Lockhart area. He graduated from Florala High School; attended LBW in Andalusia; graduated from the University of Alabama; and later attended Troy University and AUM where he received a Master’s in Administration. He retired from the Alabama National Guard after 21 years and retired from the Covington County School System after 36 years where he served as coach, teacher, and principal. He was also superintendent for the Crenshaw County School System and is currently serving as Mayor of Florala. He is married to Brenda Joyce (Majors) Holley, and they have three children.